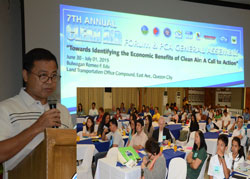 The Philippines is playing host to a regional meeting tackling best mining practices in East and Southeast Asian regions.

The week-long event, which began on June 22, is organized by the Mines and Geosciences Bureau (MGB) of the Department of Environment and Natural Resources.

Geologists and mining engineers, representing mining regulatory agencies from nine member-countries of the Coordinating Committee for Geoscience Programmes in East and Southeast Asia (CCOP), are in Manila for the meeting.

CCOP is an intergovernmental organization whose mission is to facilitate and coordinate the implementation of applied geoscience programs in order to contribute to economic development and improvement of the quality of life in the two regions.

The ongoing meeting provides a forum to engage in meaningful dialogue on mining with focus on mine rehabilitation and decommissioning.

Billedo said the meeting is also part of the country’s proposal and commitment to come up with a coffee table book highlighting success stories of developing previous mine affected areas.

He said the book, which will compile the best stories from the CCOP member-countries, will prove that “there is life after mining.”

Billedo, meanwhile, underscored the need to shift public perception to mining as a “constructive” activity, as most of the economic and material needs of a country are supplied by the mines.

“It is also high time for us to see that mining of areas is only temporary. After mining, it is entirely possible to convert the use of the land into something that is more sustainable for the community and for the environment,” Billedo said.

The MGB official explained that re-vegetation, if not feasible, was not the only option in rehabilitating mined areas, as practiced in other countries.

He cited the case of Malaysia, which successfully converted some previously mined areas into theme parks, recreational and residential areas.

Billedo said the coffee table book is targeted for production by October 2016, and may be distributed to local governments of CCOP member-countries, as funding allows.

The ongoing regional meeting allows participants to share experiences on other aspects of mine rehabilitation, such as installing facilities to prevent pollution, and passing or amending existing legislations.

Participants will also tour various mining areas in Palawan, including those administered by the Rio Tuba Nickel Mining Corp. and Coral Bay Nickel Corp. Both companies are implementing “progressive rehabilitation” of their respective mined areas.

They will also visit the mining site of the Palawan Quicksilver Mines Inc. (PQMI) in Puerto Princesa City, which used to yield mercury. The site has been abandoned by the PQMI and is currently being rehabilitated by the government.