ALAMINOS City, Pangasinan – As local bets have been preparing intensely for the campaign period to kick off on March 29, 2019, a field official of DENR here urges politicians to make the forthcoming campaign ‘environmentally friendly.’

Lawyer Lito Salatan, DENR’s Community Environment and Natural Resources Officer for Western Pangasinan, has appealed to local candidates and their supporters to spare the trees from partisan politics amid the proliferation of ‘advocacy materials’ of politicians seeking elective posts in the May 13 midterm polls.

Salatan said no campaign materials should be nailed or hooked up on the trunk of trees or be dangled on their branches adding that the Commission on Elections (COMELEC) has assigned common posters’ areas were campaign materials of candidates  are to be displayed.

“Trees are not common posters’ areas and whoever put or hang campaign materials on trees can be charged for election offense, “Salatan said who himself was a former municipal vice mayor before he joined DENR in 2015.

Should they (candidates and supporters) do this, Salatan warned that the CENRO’s Task Force Baklas will take those campaign materials down and will be ready to cooperate with COMELEC for the prosecution of those responsible.

He has urged the local bets to make their political campaign ‘environmentally friendly’ saying that “trees should not be involved in partisan politics by not making them carry campaign materials for or against candidates.” Trees should rather be ‘mute witnesses’ of peaceful and orderly polls he quipped.

He said that he will seek audience with local bets to persuade them comply with R.A. 9003 or the Solid Waste Management Act especially during campaign rallies.

He suggested that in their campaign rallies and sorties, candidates and their supporters should do the so-called “clean as you go” practice by bringing their own waste baskets to make sure that the venues where they hold their rallies would be free from litters and trashes. 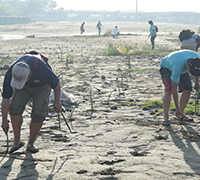 One thousand Bakawan propagules were planted during the mangrove planting which was conducted earlier (March 21, 2019) in Brgy. Cayanga, San Fabian, Pangasinan in line with the celebration of International Day of Forests (IDF).

With its theme for this year: “Forests and Education”, CENRO Dagupan personnel filled an estimated one-hectare wetland area along Brgy. Cayanga which is also one of the plantation sites under National Greening Program (NGP).

The United Nations (UN) General Assembly proclaimed the 21st day of March for the celebration of IDF to raise awareness of the importance of all types of forests. Hence, for this year, CENRO Dagupan aims to highlight the value of mangrove forest.

Mangrove forests play an important role in mitigating and adapting to the effects of climate change. “It holds the soil brought by sedimentation which in turn provides protection to the nearby communities during flooding. During storm surges, it acts as “shock absorber” as it buffers the impact that could reach the communities. Aside from this, mangrove forest absorbs 3-4 times more carbon than upland forests due to its thick leaves”, Senior Ecosystem Management Specialist Norma Laluan explains.

Aside from climate change, mangrove forest also helps in terms of livelihood. “Mangrove forest serves as breeding ground for fishes and crustaceans which greatly benefits our fishermen in support to their livelihood”, SEMS Laluan continues.

All other types of forests, aside from mangrove, are vital. Hence, their conservation and protection against illegal forest activities are highly promoted pursuant to Presidential Decree No. 705 or the “Revised Forestry Reform Code of the Philippines”. 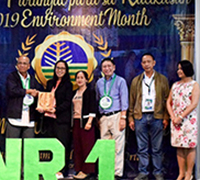 Efforts of different stakeholders in the protection and conservation of the environment were acknowledged by the Department of Environment and Natural Resources (DENR) Region I during the conducted “Gawad Parangal para sa Kalikasan” last July 19, 2019 in Marand Resort and Spa, Bauang, La Union.

Within Central Pangasinan, four PNP Offices, one LGU, and one Non-Government Organization were awarded with “Natatanging Parangal ng Pagkilala” because of their contribution and support to environmental programs.

Because of their consistent involvement in apprehension of illegally sourced forest products and strict enforcement of environmental laws, rules and regulations, efforts of PNP Aguilar, Mangatarem, Labrador and Bugallon were recognized.

Among 22 local government units within the jurisdiction of Central Pangasinan, LGU Basista was the lone awardee during the activity. Their hard work in promoting the advocacy on protecting the environment thru solid waste management was also acknowledged.

“We feel overwhelmed because the efforts of our municipality on environmental protection thru solid waste management was recognized. We were not bounded by our limitations such as being a 4th class municipality rather we were driven by our goal to help and get involved in helping our environment”, said Local Disaster Risk Reduction and Management Officer I Gellie Saldivar, the designated Solid Waste Management Officer of LGU Basista.

Aside from them, CS 1stGreen, an NGO was also awarded because of their 300-hectare bamboo plantation as their contribution to National Greening Program (NGP). From establishment to maintenance, the bamboo plantation is well managed at their own expense.

These environmental partners were just among the 37 stakeholders for the whole Region I who were awarded during the “Gawad Parangal para sa Kalikasan”.

Said activity was included in the culminating program for Environment Month 2019, which is annually celebrated every June. – mase, 2019

The establishments were found to be discharging wastewater that exceeds the allowable DENR effluent standards, a violation of Republic Act 9275 or the Philippine Clean Water Act of 2004.

On August 1, Environment Secretary Roy Cimatu, Department of Interior and Local Government Secretary Eduardo Año and Department of Tourism Secretary Bernadette Romulo-Puyat announced that El Nido shall remain open during its rehabilitation but swimming will not be allowed in selected areas in Bacuit Bay particularly those near the two outfalls.

The identified beach areas have been cordoned off and signages installed to remind the public of the “no swimming policy.”

Coron and Bacuit Bays are classified as Class SB waters suitable for ecotourism and recreational activities such as bathing, swimming and skin diving. However, the encroachment of easement zones and waterways by commercial establishments and households have led to the poor water quality of the bays and prevented their beneficial use.

In 2016, Coron Bay was designated as a Water Quality Management Area (WQMA), an integrated water quality management system designed to protect and save bodies of water through the collaborative efforts of the government and various stakeholders.

Bacuit Bay is in the process of being declared a WQMA. The Environmental Management Bureau (EMB) MIMAROPA has conducted meetings to orient stakeholders on the stages of establishing a WQMA and the present water quality of Bacuit Bay.

“We have to start at educating our stakeholders on their duties in protecting the environment, and the accompanying sanctions should they fail to fulfill such,” said EMB MIMAROPA Regional Director Michael Drake Matias.

“We hope that the public, especially the business sector, would understand that what we are doing, the stakeholders forum as well as the issuance of the CDO against erring establishments, form part of our shared responsibility to protect nature and preserve it for future generations,” he concluded.

A public notice on the nature of the violation was posted in the premises of the erring establishments and their water lines and facilities sealed to prevent wastewater discharge. (With reports and photos from EMB MIMAROPA and El Nido PAO) ###

The Department of Environment and Natural Resources (DENR) on July 17 disabled all water lines and facilities of Agumil Philippines, Inc., after a Cease and Desist Order (CDO) was issued against the company for violating Republic Act 9275 or the Philippine Clean Water Act of 2004 and polluting the Calabugan River in Brooke’s Point, Palawan.

The four-page CDO, which was released by DENR’s Pollution Adjudication Board (PAB), stated that Agumil Philippines, a palm oil mill facility, has discharged wastewater that exceeded the DENR Water Quality Guidelines and General Effluent Standards pursuant to DENR Administrative Order 2016-08, a clear violation of the provisions of the said law.

As such, the company was ordered “to cease and desist from undertaking any activity and/or operating machines or equipment generating pollution during the pendency of proceedings before the Board.”

The issuance of the CDO came at the heels of a complaint filed by residents and officials of Brgy. Calasaguen in January of this year, when they saw dead fish and prawns floating in the town’s Calabugan River. The river was found coated with black and oily liquid allegedly from the processing plant of Agumil Philippines. The oil mill was located in the nearby Brgy. Maasin.

Upon investigation of the Community Environment and Natural Resources Office (CENRO) in Brooke’s Point, the management of the oil mill plant explained that the pipes of their siltation pond were accidentally hit by a backhoe during their regular dredging activity causing a leak that flowed towards Calabugan River.

The CENRO observed that the damaged pipes were only covered with sacks and wrapped with rubber stripped from the interior part of a tire. Officials of Agumil Philippines said that these were temporary measures and would be replaced with a concrete mound.

The CENRO further noted that the outlet of the broken pipes was positioned towards a creek that is a tributary of the river.

This prompted EMB MIMAROPA to issue a Notice of Violation against the oil mill on February 21; and to subject it to a technical conference (TC) on March 15 to immediately correct its violations. During the TC, Agumil Philippines committed to submit on March 22, its plant and treatment process and a comprehensive pollution control program/compliance plan. However, it failed to do so.

“The Pollution Adjudication Board saw that there is indeed a prima facie evidence that Agumil Philippines ‘has discharged pollutants that constitute immediate threat to life, and public health, safety and welfare,’ hence the immediate issuance and implementation of the CDO,” EMB MIMAROPA Regional Director Atty. Drake Matias stated.

Besides stopping Agumil Philippines from generating pollution, the CDO also directed it to show cause why a criminal case should not be filed against it for using a by-pass, or a diversion of wastewater from its collection system. It also reminded the company that it may be penalized a maximum fine of Php 200,000.00 for each day of violation, which is over and above the administrative fine for other violations it has committed.

The regional EMB was tasked to closely monitor Agumil Philippines’ compliance with the Order.

“The effort to save Calabugan River in Brooke’s Point forms part of Secretary Roy A. Cimatu’s priority agenda to restore problematic bodies of water in the country and have clean water for all,” RD Matias shared.

“So we would like to remind everyone that the implementation of environmental rules and regulations is not only confined within identified tourism hot spots, such as El Nido and Coron in Palawan. We are mandated to enforce the law across the region and in the entire nation,” he pointed out.

“We are glad that communities are getting more involved in saving the environment. What Brgy. Calasaguen did is a testimony of our shared responsibility to protect nature, a mindful act worthy of emulation,” the Adornado said.

A team from EMB-MIMAROPA handed the CDO to Agumil Philippines Mill Manager Arthur Elicanal, and also posted notices of the company’s violations as part of the execution of the CDO. (With reports and photos from EMB-MIMAROPA and CENRO Brooke’s Point.)###