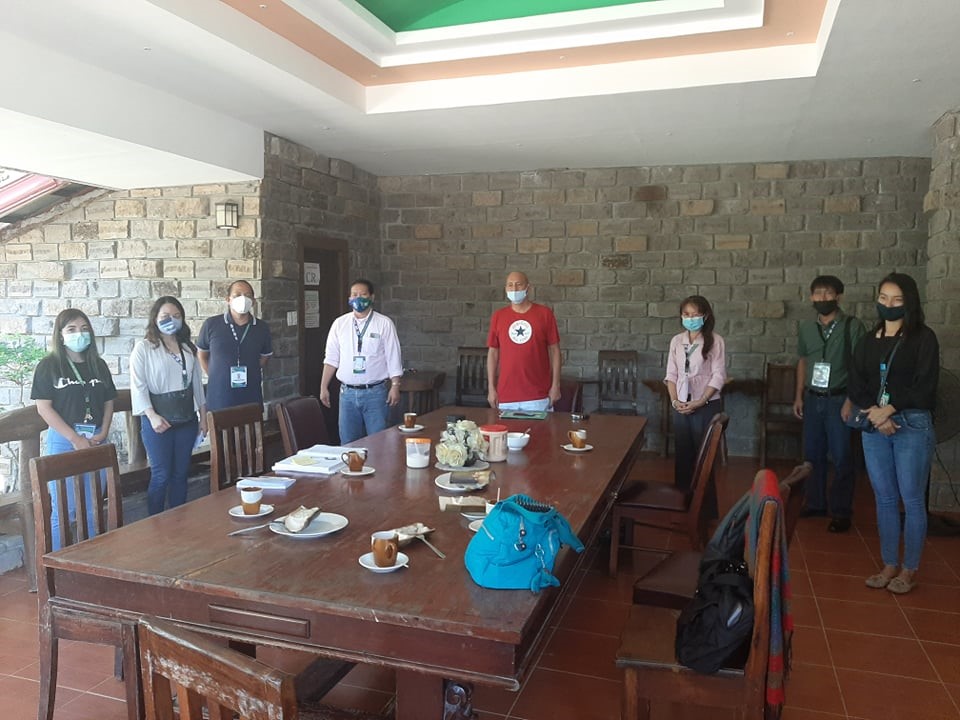 Guided by the saying “there is immense power when a group of people with similar interests gets together to work toward the same goals,” Department of Environment and Natural Resources (DENR)- Ilocos Region Regional Executive Director Atty. Crizaldy M. Barcelo led the team together with EMB Region 1 Regional Director Engr. Ma. Dorica Naz-Hipe, and Dr. Chester O. Casil, OIC-CENR Officer to a courtesy visit to Congressman Arnold F. Celeste

and brought to the table the priority programs of the department in partnership with Cong. Celeste of the 1st Congressional District of Pangasinan.  Cognizant of a daunting task for the environment, RED Barcelo’s group was not thwarted by the pandemic in building a pleasant working relationship with the different congressional leaders in the region.

RED Barcelo presented the status of the National Greening Program established to alleviate poverty among upland and lowland households through working contracts for maintenance and protection of established NGP sites. Currently, a total of 493 hectare established NGP is located in Western Pangasinan managed by People’s Organizations.

It can be noted that on 2019, Municipality of Bani adopted Forest land Use Planning to maximize the potential use of forest resources. The department is counting on the commitment of other municipalities to include FLUP while developing their Comprehensive Land Use Plan to perfectly manage their forest lands.

It is remarkable that through the support of the LGU executives Land Disposition has also been intensified to attain the departments commitment to issue thousands of residential and agricultural patent titles by 2022. By 2019 alone, 394 residential and 294 agricultural patents has been issued in Western Pangasinan which benefitted mostly low-income households. By partnering with the local government, identification of remaining untitled lots workable for titling will speed up the process and could bring out more potentials.

Re-appraisal of foreshore areas has become one of the priorities as the country faces a national issue on public health because of the Corona Virus. The national government is very keen on income generation to support various intervention measures and recovering programs to address the needs of the people. In Western Pangasinan, various businesses and service sectors are thriving on natural resources for years without any regards on occupation fees. With the assistance coming from the local government, the department can be able to hold the operators accountable and earn what is due for the government. In relation to this, Pacific Farm located in Bolinao whose Lease Contract expired on June, 2005 is being eyed as one of the biggest potential collection amounting to 64 Million Pesos if it can be worked out. As agreed by both parties, Pacific Farm will be summoned for a meeting the soonest possible time.

While recovering foreshore and salvage zone as the implementation of re-appraisal accelerates, illegal settlers living along the foreshore was pointed out. The local government will have to consider relocation areas for these residents to ensure their welfare. 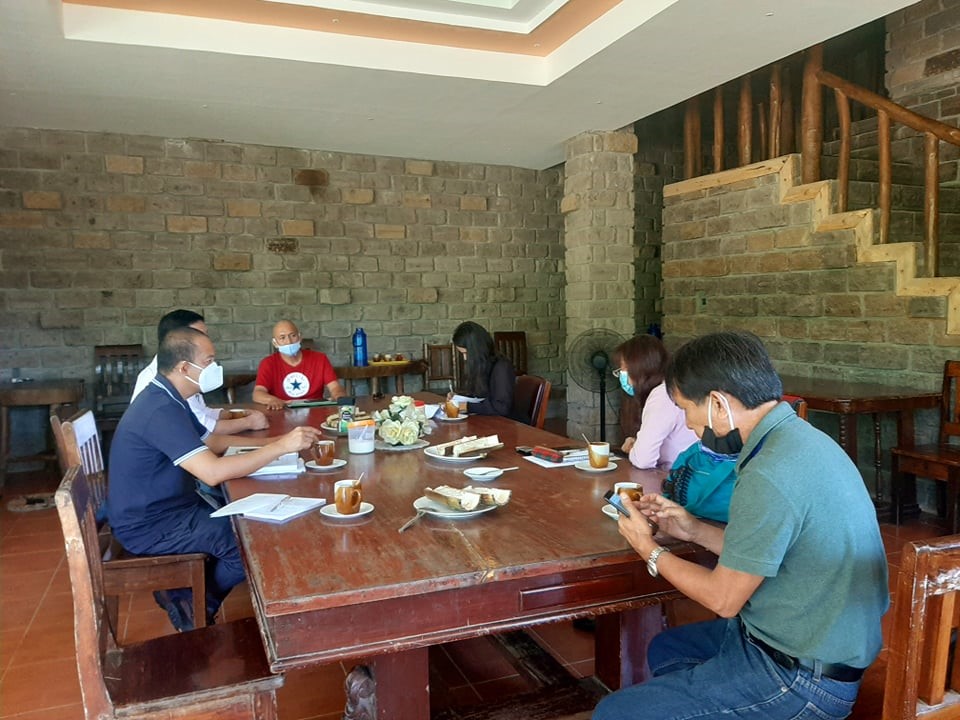 Environmental Management Bureau-1 Regional Director Ma. Dorica Naz-Hipe cited installation of Waste Water Treatment along the coastal areas of the province. Stating that stricter compliance to Clean Water Act is being pushed to meet the water standards to avoid a repetition of Boracay Closure for rehabilitation. As an agreement, representatives of Cong. Celeste will start working out with proposals to comply with the installation of waste water treatment on the following week.

EMB Regional Director Engr. Hipe regarded waste disposal facilities as one of the problems of most municipalities. Open dumpsites were ordered closure relative to the RA 9003 because of its environmental impact, yet, the preferred sanitary landfill remained indefinite because of compelling reasons of either no appropriate location or not enough funding for land acquisition. For the meantime, LGUs are reduced to “no segregation, no collection policy” in order to address solid waste management in their areas.

On the other hand, the congressman mentioned that LGU Bolinao prohibits commercial fish pens in order to protect its coastal areas in favor of its tourism industry. They are actually planning to elevate to eco-tourism as they have been in coordination with BFAR to conduct carrying capacity study for mariculture. But the water condition of its adjacent coastal area of Anda threatens the marine resources of Bolinao. The meeting has just been an opportunity to discuss possible action to address the concern.

As a committed environmental advocate, Congressman Celeste offered to support all the endeavors of the DENR which is geared to protect and conserve the environment for the interest of the citizenry. ###

SAN FERNANDO CITY, La Union – The Department of Environment and Natural Resources here in Ilocos Region positively accepted the challenge of moving towards ISO Certification on Environmental Management System (EMS).  According to For. Joey Austria, Team Leader on EMS from the DENR Central Office, “this is the first region which accepted the challenge on EMS” of which according to him is a good indicator of a driven leadership in the organization.  As the primary region to take on the test, Mr. Austria commits their full support to the region.

The Core Team from the Central Office lauded the leadership of the regional office as it bravely started the first step through orientation of all the employees about the essence of EMS.  EMS ensures that its core process and service are safe, reliable and of good quality meeting the ISO or International Standards.  This is a strategic decision for an organization that can help to improve its overall performance and provide a sound basis for sustainable development initiatives.

The benefits of practicing EMS include: 1) reduction in waste production or wise use of resources 2) avoidance in use, and costly disposal of other hazardous or potentially polluting materials 3) a planned approach to compliance with regulations and the consequential reduced risk of prosecutions and fines and 4) increased profitability, better access to markets and improved relationships with stakeholders. 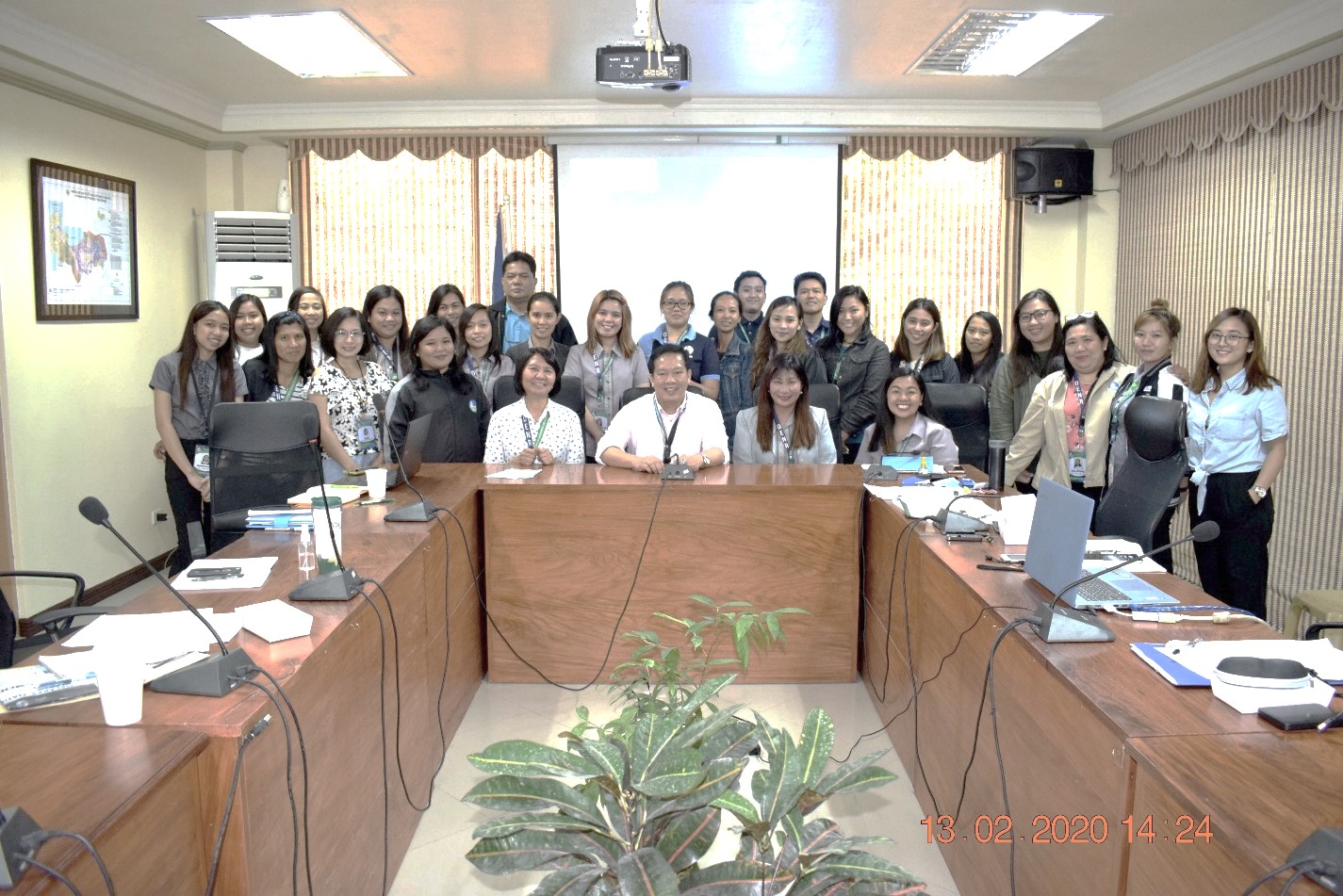 SAN FERNANDO CITY, La Union– In line with the Department of Environment and Natural Resources (DENR)’s implementation of its program and projects, the information arm of the agency convened for the first this year 2020 to strategize in the Communication Education Public Awareness (CEPA) or Information, Education and Communication (IEC) campaign. Led by the DENR- I, Regional Public Affairs Office (RPAO), the 2020 first Regular Meeting for information officers and Youth Desk Officers was held at the DENR-Region- I Conference Hall, Government Center, San Fernando City, La Union last February 13, 2020.

The said occasion was likewise, is the first face to face meeting of all DENR- I information officers with Regional Executive Director Atty. Crizaldy M. Barcelo after he assumed his post in the region.  Information Officers from DENR-1, PENROs and CENROs and sectoral focal persons, from the Environmental Management Bureau, Region- I (EMB- I) and Mines and Geosciences Bureau (MGB-I) convened to strategize and strengthen this year’s IEC campaign on DENR’s advocacies, programs and projects. Likewise, updates and directives from the Central Office, 2020 Communication Plan and strategies for the DENR-I official newsletter, the Green News, were presented.  The 2020 Youth Work Program was discussed as well with the representatives from PENROs and CENROs.

RPAO Chief, Senior Communication Development Officer, Renelita Santos proposed to the information body of the DENR- I to have a regular communication between information officers to synchronize informations, report and activities.“ It is like what the Central Office is doing to prevent struggles or confusion in the implementation and execution of our activities”, she said.

Moreover, updates regarding the Search for the Recognizing Individual/Institutions towards a Vibrant and Enhanced Rivers Award (R.I.V.E.R.S. for Life) was also tackled.  It was cited in the meeting that the Naguilian River System was chosen and endorsed as the region’s official entry to the 2019 R.I.V.E.Rs  for Life Award search.

In his message, RED Atty. Crizaldy M. Barcelo, encouraged the information officers to fulfill their duties well and to enjoin the citizenry to support DENR programs and projects. 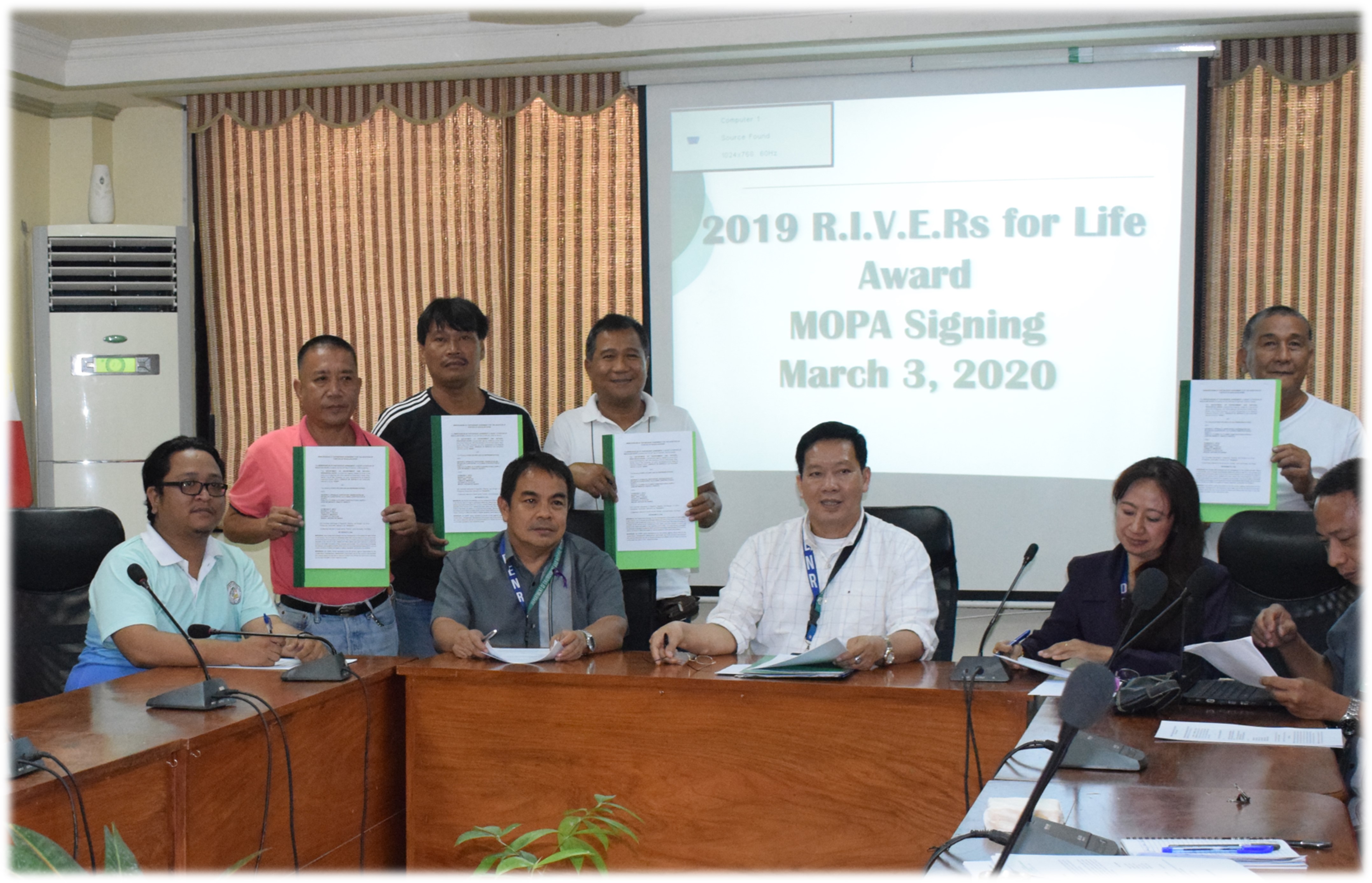 SAN FERNANDO CITY, La Union – In its bid to forge partnership towards a unified cadence in the protection and conservation of the environment, Regional Executive Director Atty. Crizaldy M. Barcelo recently convened the Industrial and Commercial Sand and Gravel permittees in Naguilian River.

The partnership involves the 22.9 kilometers stretch of the Naguilian River where the group aims to ensure the flow and discharge of the water from the two tributaries (Bagulin and Burgos) of the waterbody through the establishment of an organized quarry lane.

During the meeting, it was also discussed that all interventions on issues identified in the area can also be infused by the permittees for the improvement and development of the riverbanks including their social responsibility to those living along the Naguilian River.

RED Barcelo urged the permittees to support the project as their way of giving back to the environment which has been their source of livelihood for years now.  During the meeting, the permittees manifested their full support to the clamor of the RED through dredging of the the heavily silted part of the river.  They unanimously agreed that it is their duty to save the “river” which they referred to as the “duck that lays the golden egg.”  This is also seen to be a solution to the perennial flooding in the town of Naguilian as previously described by Vice Mayor Reynaldo Flores during the ocular inspection conducted by the DENR 1.

Further, the Mines and Geosciences Bureau also presented to the RED the quarry lane plan which will be utilized as guide of the permittees in the adoption of a segment of the river towards its rehabilitation.

As the DENR Chief in the region, RED Barcelo also banks on his trust and confidence to the permittees as partners in environmental protection with a common vision and ‘driven by passion’ like what Sec. Roy A. Cimatu built on during the recent Tullahan River dredging in partnership with San Miguel Corporation (SMC).

Naguilian River System is identified as Water Quality Monitoring Area by the Environmental Management Bureau in 2016. A MOPA has been inked recently both by the DENR 1 and the sand and gravel permittees of Naguilian, La Union. 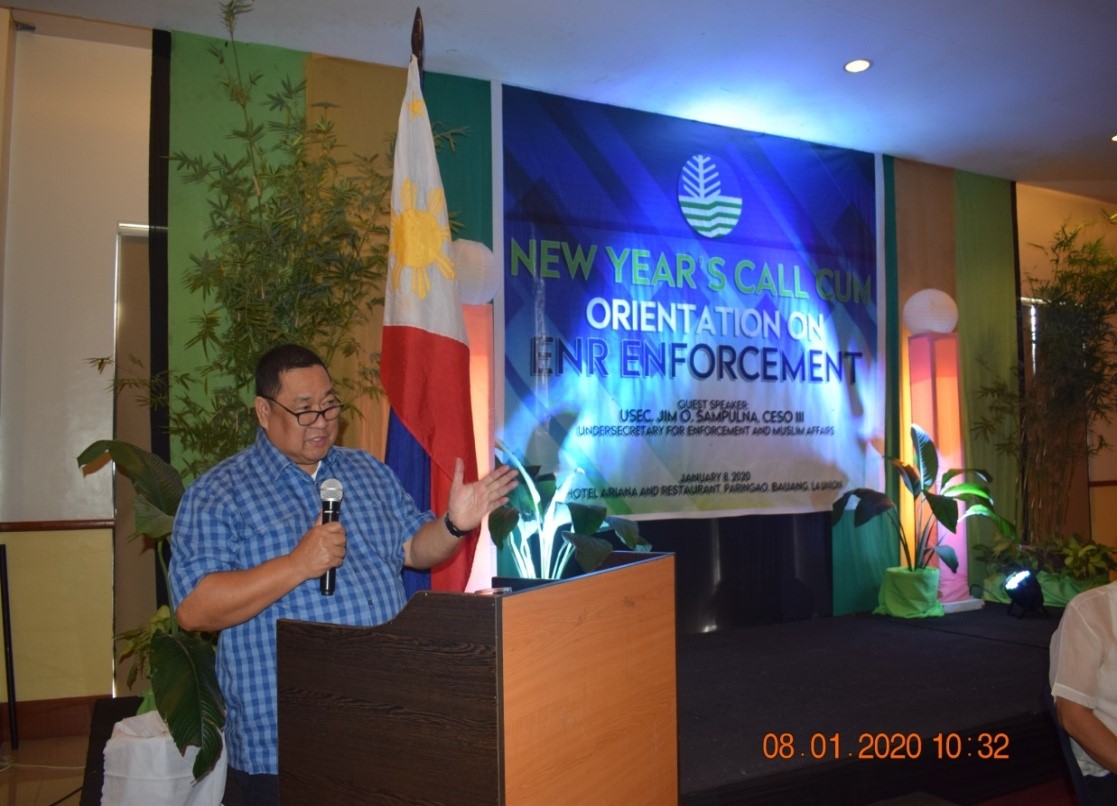 In his Call/Marching Order, the Regional Executive Director (RED) Crizaldy M. Barcelo gave the directives of the DENR Secretary Roy A. Cimatu. RED Barcelo pointed out the tall orders of the secretary in the DENR New Year’s Call held recently. One of which was that the DENR Regional and field offices should sustain and maintain the gains and successes made in 2019 as well as to improve and correct the downs. Further, DENR Regional Officials should regularly visit far flung or remotest DENR Field Offices and project sites (e.g. NGP) and be visible to the communities and let them feel our presence that there is an agency truly concerned with our environment. After RED Barcelo delivered his marching order, he invited the participants for a New Year ceremonial toast.

Further, USec. Jim O. Sampulna, CESO III, Undersecretary for Enforcement and Muslim Affairs. USec. Sampulna mentioned that the DENR Secretary wanted to create an Enforcement Bureau to give solution to the present problematic situation wherein some of our DENR Personnel specifically patrollers, protection officers, and rangers are being killed for enforcing DENR laws in his lecture on Environment and Natural Resources Enforcement.