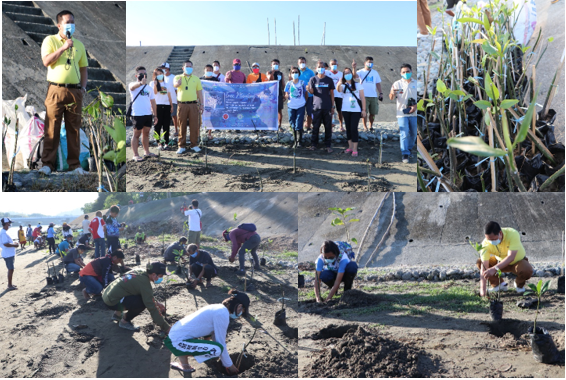 Bacnotan, La Union – In line with the celebration of the Climate Change Consciousness Week, National Day for the Youth in Climate Change Action, National Environmental Awareness Month and Clean Air Month in the month of November, the Department of Environment and Natural Resources, Region- I (DENR- I) in partnership with PENRO La Union and the local government of Bacnotan, La Union while representing the youth sector are Don Mariano Marcos Memorial State University (DMMMSU) Institute of Environmental Governance and the Lupon ng mga Indibidwal na Nangangalakal ng Kapaligiran (LINK), jointly conducted a mangrove planting activity along the riverbanks of Baroro River situated in Bacnotan, La Union on November 25, 2021.

A short program ensued in the planting area before the planting of about 500 mangrove propagules (Bakauan Lalake and Bakauan Babae species) sourced from the LGU- Bacnotan while another 500 mangrove propagules were planned to be planted in the eastern portion of the Baroro River. Camille Agatona, LINK President acknowledged the participants led by Baroro Barangay Captain Randy Macabitas and the coastal residents of said barangay. LGU- Bacnotan was represented by Municipal Agriculture Officer Dr. Divina Gracia Apigo who welcomed the personnel of DENR- I, PENRO La Union and other participants. Mr. Celso Jucutan, representing DMMMSU and also LINK co- founder delivered the overview of the mangrove planting activity and reiterated the establishment of 12 Beach Forest Parks within the province of La Union of which the area of Baroro River is one of the selected sites. Likewise, he announced the November 9, 2021 initial mangrove establishment (Saging- saging and Rhizopora species) within the Baroro River and was initiated by the Department of Trade and Industry (DTI).

DENR- I Regional Executive Director Atty. Crizaldy M. Barcelo, who led the tree planting activity, reminded the participants the significance of mangroves, “Mangroves are the first line of defense against tidal waves and habitat of marine resources,” he said. RED Barcelo reiterated the Republic Act No. 7610, otherwise known as the “establishment of reservation areas in all coastal areas in each municipality of the country solely for the preservation, protection, reforestation and sustainable development of the mangrove forests,” and announced the DENR Secretary Roy A. Cimatu’s plan for the initiation of Tree Farms. He also thanked the participants for the utmost support of DENR’s programs and projects particularly mangrove planting which is very vital in the climate change adaptation. Representing PENRO La Union is former CENR Officer of Tagudin, Ilocos Sur and Chief TSD Alfredo R. Racoma Jr. who delivered the closing remarks, thanked and prompted the coastal residents in the protection of the planted mangroves as a continuing activity and high survival rate. The workforce of the DENR- I Regional strategic Communication and initiatives Group (RSCIG) headed by SCDO Renelita A. Santos, facilitated and hosted the fruitful program and activity. (GCG- RSCIG)