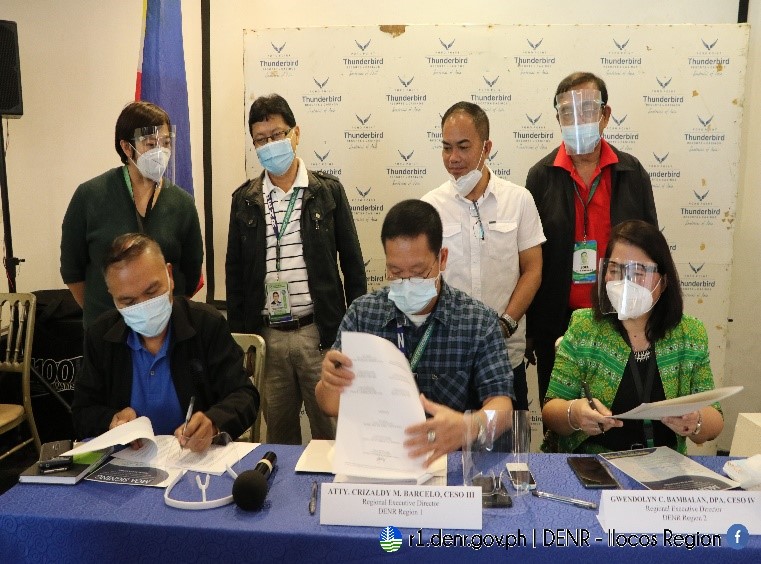 The Department of Environment and Natural Resources inter-regional Memorandum of Agreement between three regions in Northern Luzon which aims to intensify the enforcement of environmental laws and harmonize resource protection was forged by the head executives of DENR, Regional Executive Directors Atty. Crizaldy M. Barcelo of DENR Region 1, Ralph Pablo of DENR-CAR, and Gwendolyn Bambalan of DENR Region 2 on February 04, 2021 in San Fernando City, La Union. The MOA singing was witnessed by the Assistant Regional Directors for Technical Services and Chiefs of the Enforcement Division of the three DENR Regional Offices.

The convergence of the said regions will lead to the establishment of inter-regional monitoring stations to unify and streamline efforts and resources through mutual complementation and collaboration for the full protection and conservation of natural resources. With harmonious coordination, the DENR regional offices wish to curb the incidence of illegal transport of forest products, wildlife, and illegally extracted, removed, and transported minerals, and minerals by-products in the regions.

RED Barcelo assured his fellow head executives of his full support to the regions for the full realization of the agreement and the sustainability of future activities to intensify the said implementation. Looking forward to the development of strategic action plans, RED Barcelo suggested significant strategies such as reactivation of inter-regional law enforcement and coordination with other agencies such as the government prosecutors. RED Barcelo highlighted the need to coordinate with the government prosecution to penalize offenders of environmental laws, knowing not much have been convicted for such crime because of plea bargaining.

Executive Directors Ralph Pablo and Gwendolyn Bambalan have also expressed their full support to the agreement. RED Pablo reiterated the need for a proper orchestration of efforts of the three regions and the importance of the commitment, dedication, passion and integrity of DENR personnel manning the monitoring and checkpoints within the regions for it to be fully effective.

RED Bambalan acknowledged the significance of the tripartite agreement in addressing one of the identified causes of massive flooding in Cagayan that happened last year which is river siltation. She aligned the purposes of the inter-regional agreement to the rehabilitation undertakings in the Cagayan River through the Build Back Better project of President Rodrigo Duterte. The ARD also emphasized the intensification of surveillance operations to prevent deforestation following the directive of DENR Secretary Roy Cimatu.

To intensify the enforcement of environmental laws and harmonize resource protection in the three regions, the regional executives agreed to establish linkage and close coordination among the DENR forest products monitoring stations through their respective Provincial Environment and Natural Resources Offices (PENROs) and streamline the protocols in checkpoints, apprehensions, and seizures, and administrative adjudications in the regions. (JAP-RSCIG)