SAN FERNANDO CITY, La Union - ‘Not even the pandemic can stop the initiatives for the Naguilian River System, this is the strong message with the character and spirit which surfaced in the collaborative efforts of the Department of Environment and Natural Resources (DENR) Ilocos Region thru the Environmental Management Bureau (EMB), Provincial Environment and Natural Resources Office (PENRO) -La Union, Provincial Government of La Union and the Local Government of Naguilian in their sustainable efforts for this water body, which brought them the fame of bagging the 1st Place in the recently conducted Search for the Best R.I.V.E.Rs for Life Award or Recognizing Individuals/Institutions towards Vibrant and Enhanced Rivers with a rating of 93%.

Through Resolution No.1 series of 2020 by the National Committee on R.I.V.E.Rs for Life Awards of the DENR declaring the winners in the most coveted nationwide contest, Naguilian River System came out with a well-built mechanism to outdo and prevailed over the 15 other regions which also tried to grab the award. 16 entries were reviewed and evaluated based on the following criteria: (a) Aesthetics and Water Quality Improvement – 35%; (b) Solid Waste Management – 25%; Partnership/community Mobilization – 25%; and (d) Information and Education Campaign - 15%.

The officialdom of the DENR in Region 1 headed by Regional Executive Director Atty. Crizaldy M. Barcelo expressed his gratitude to everyone who worked for the achievement of this award which he considers as another feat attributed to the team and collaborative efforts of the regional office and its field offices. Atty. Barcelo also underscored that “this is another manifestation of an unselfish leadership giving the full trust and confidence to the people you lead and guiding them to maximize their potential in attaining this achievement.”

The R.I.V.E.Rs for Life Award was launched and initiated by DENR Secretary Roy A. Cimatu which aims to: (1) raise awareness on the need to protect and conserve the country’s rivers as the lifeblood of the Earth and human civilization; (2) tap concerted action to protect the country’s rivers from degradation and pollution and assure their suitability, sustainability and further improvement for their designated use or classification; (3) come up with appropriate mitigation measures and interventions to help address the continued worsening condition of river systems in the country; and (4) recognize CENRO’s and PENROs that have responsibly implemented DENR policies, programs, project and activities and have enforced ENR laws and regulations in their area of responsibility. This competition likewise addresses the concern on solid waste management and clean water which are among the ten (10) major programs of Secretary Roy A. Cimatu.

RED Barcelo also added that “rivers are essential for human and nature to survive so it is our duty to ensure that these bodies of water are not exploited to secure livelihood and the wide-range of benefits that people derive from them.” 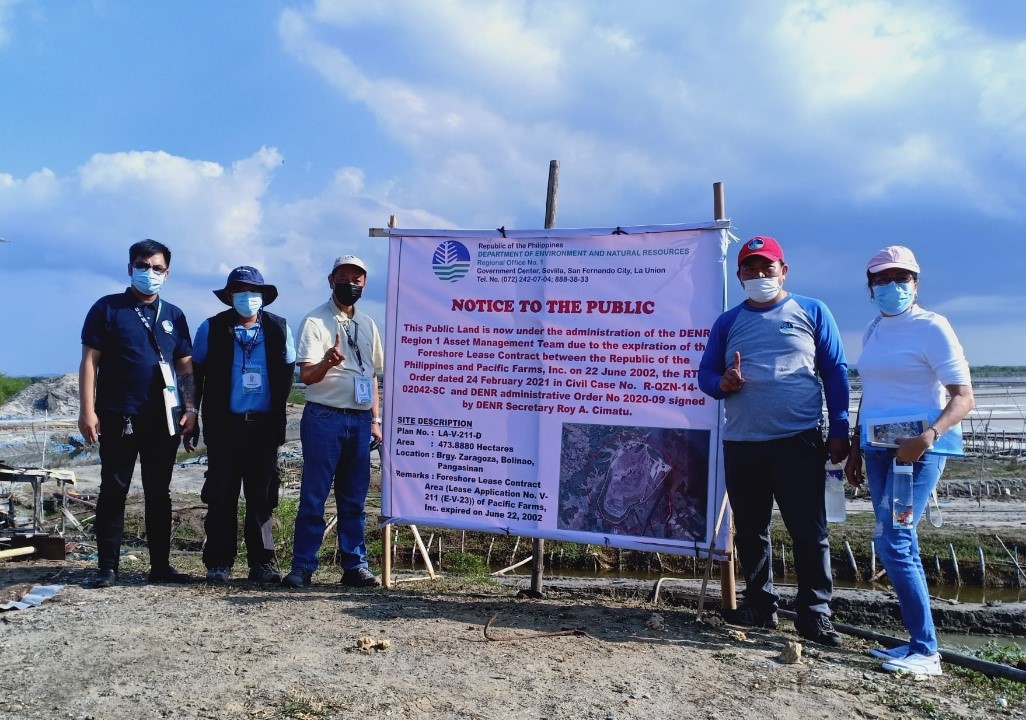 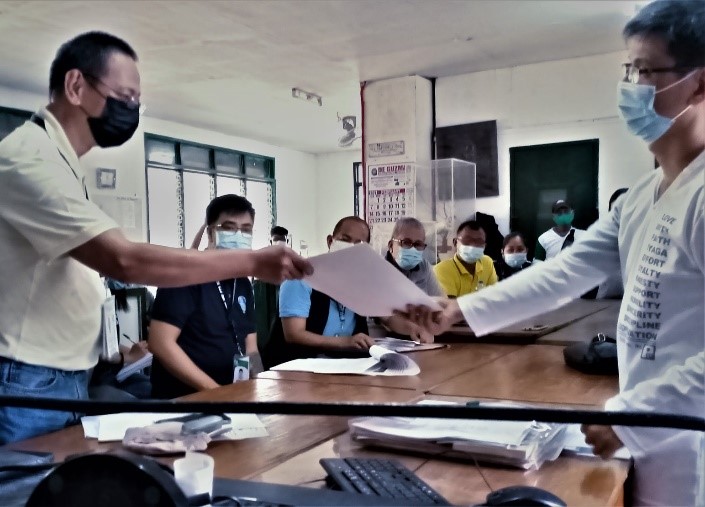 BOLINAO, Pangasinan – A composite Asset and Management Team (AMT) of the Department of Environment and Natural Resources, Region- I (DENR- I) led by Provincial Environment and Natural Resources Officer (PENRO) of Pangasinan, Maximo F. Soriano Jr., CENR Officer of Western Pangasinan- Chester O. Casil, DENR- I Legal team include Atty. Fidel De Vera and Atty. Santiago L. Pagaddut, initiated the official and peaceful take- over of the massive salt farm due to expired Foreshore Lease Contract (FLC) situated in Barangay Zaragoza, Bolinao, Pangasinan and presently managed by the Pacific Farm Inc. (PFI). The DENR- I AMT initiated the take-over on February 26, 2021 in coordination with the local government unit (LGU) of Bolinao, the Philippine National Police (PNP) and Zaragoza Barangay Council.

FLC is an agreement between the DENR and the applicant which contains specific terms and conditions as stated in the DENR Administrative Order No. 99- 34. A 25- year FLC was first issued on December 1, 1955 to November 30, 1980 by DENR to the Insular Farm Inc. with a subject area of approximately 473.8880 hectares. The Leasehold Rights of the said salt farm was then transferred and approved in favour of the Pacific Farm Inc. on March 31, 1958 which then renewed for another 25 years on June 23, 1977 and eventually expired on June 22, 2002. Foreshore Lease is granted by the State to a qualified applicant covering foreshore lands, marshy lands and other lands bordering bodies of water for commercial, industrial or other productive purposes other than agriculture. The lease runs a duration of 25 years and renewable for another 25 years.

The DENR- AMT first made an ocular inspection of the salt farm in the area and installed printed tarps informing the public that the area is under the DENR administration before a meeting via zoom was between DENR- I Regional Executive Director Atty. Crizaldy M. Barcelo, Atty. Pagaddut and the Office of the Solicitor General (OSG) took place at the CENRO Western Pangasinan Office in Alaminos City. The meeting aims to scrutinize and discuss the next actions to be undertaken by the AMT and to tackle the management of the raw salt ready for harvesting in March, 2021 and the harvested raw salt ready for transport. A formal turn-over ceremony followed at the PFI Office between the DENR-I team and PFI management headed by Operational Manager Gerard Khong Hun. Also present was Bolinao Municipal Mayor Alfonso F. Celeste and Zaragoza Barangay Captain. Mayor Celeste in his message, supported and recognized the DENR take- over of the PFI- managed salt farm in his municipality of which he valued the economic benefits and job opportunities for his constituents. Likewise, PENRO Soriano expressed his gratitude to the PFI for their full cooperation and read the memorandum from the DENR- I head executive dated January 28, 2021 and the Court Order dated February 24, 2021 from Quezon City RTC Branch -101 Presiding Judge Evangeline C. Castillo- Marigomen. Atty. De Vera of DENR- I Legal Division, interpreted later the legal bases of the take- over.

Further, PFI head Mr. Khong Hun gave a brief orientation to the DENR- AMT regarding the utilization of the salt farm including the number of workforce of about 500 individuals and equipment considering the 7,000, 000 kilos of harvestable salt for the months of March to June, 2021. PENRO Soriano also turned over the result of the conducted inventory of assets/ improvements inside the expired FLC. A short conference took place between the DENR- AMT and the management of the PFI after the turn-over in which Mr. Khong Hun reiterated his request regarding the tons of salt due for harvest by the succeeding months and the “said harvests shall pay the 500 farm workers.” Atty. De Vera however, clarified that Hun’s proposal is not in the AMT’s hand to approve and it was suggested that the salt farm company will send a formal letter and will be forwarded to the higher office. Hence, both parties agreed that for the meantime, the proceeds of the sale be put into an escrow account until the result of the pending case at the court be completed. The DENR also informed the company that a team shall be deployed in the salt farm site to monitor the turned- over area of which the company agreed. (𝐑𝐒𝐂𝐈𝐆/ 𝐂𝐄𝐍𝐑𝐎 𝐖𝐞𝐬𝐭𝐞𝐫𝐧 𝐏𝐚𝐧𝐠𝐚𝐬𝐢𝐧𝐚𝐧) 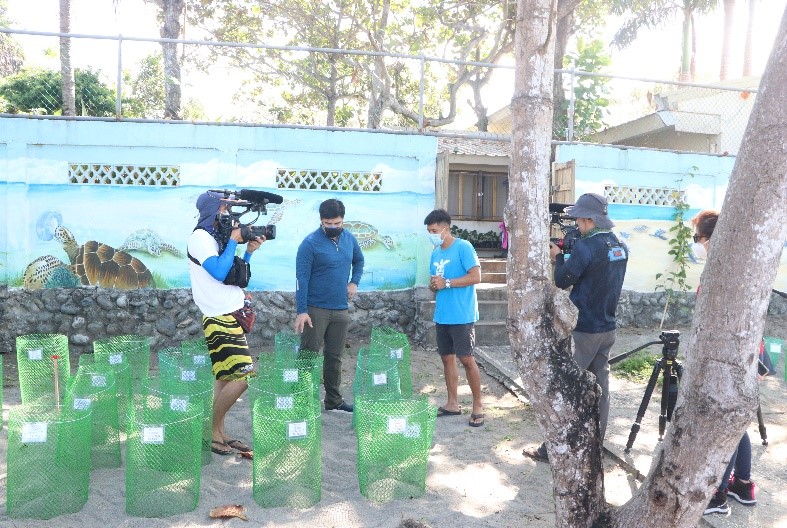 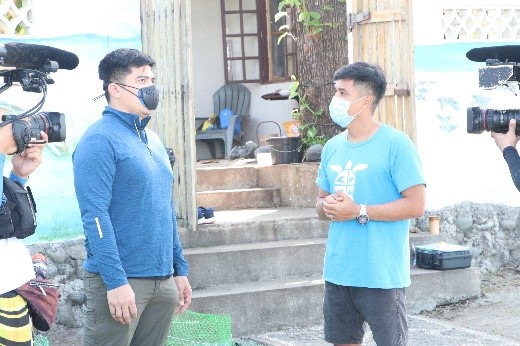 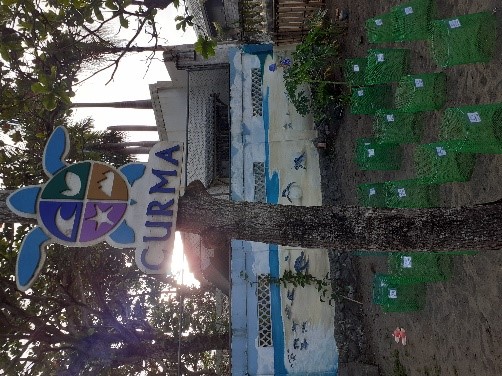 San Juan, La Union – The Department of Environment and Natural Resources, Region-I (DENR- I) was recently witnessed the sea turtle hatchlings released by CURMA, a non- profit, volunteer and non- government organization (NGO) based in Barangay Ili Norte, San Juan, La Union and managed by father and son Dr. Toby Tamayo and Carlos Tamayo. It was established in 2010, mainly focused on environmental and wildlife protection especially on sea turtle (Pawikan) conservation in the Philippines. The wildlife protection and conservation activity was held last January 8, 2021 also in line with the Zero Waste Month 2021 this January. CURMA is currently assisting the province of La Union in various environmental advocacies particularly in sea turtle conservation efforts.

Representatives from the DENR- I Conservation and Development Division (CDD) and the Regional Public Affairs Office (RPAO) witnessed the broad daylight back to the sea released of about 23 marine turtle hatchlings along the shorelines of CURMA headquarters wherein a Marine Turtle Hatchery is also located. The said hatchery contains marine turtle eggs gathered from turtle nests by volunteers and nature lovers along the shorelines of barangays Baroro, Pandan and Tammocalao, Bacnotan, La Union and barangays Ili Norte and Taboc, San Juan, La Union. The hatchlings in the hatchery include Olive Ridley marine turtles and the green sea turtle, also known as the Pacific Green Turtle, a species from family Cheloniidae (Sc. Chelonia mydas). These turtle species are now considered endangered because of, climate change, illegal- trade and other human harmful activities. Sea turtles serve as ambassadors of marine life and one of the most gentle sea creatures. They show the true nature of most living beings and they peacefully exist. They usually nest at night, under the cover of darkness during the nesting season which typically begins in September until the month of February.

The sea turtle hatchlings release was documented by the television crew of “Born to Be Wild.” A Philippine environmental and wildlife television travel documentary show broadcast by GMA Network and hosted by Dr. Ferdinand “Doc Ferdz” Recio, a popular veterinarian and a certified lover of animals who runs his own veterinary clinic. The “Born to Be Wild” CURMA episode will be shown on GMA Network this month of January, 2021. (GCG-RPAO) 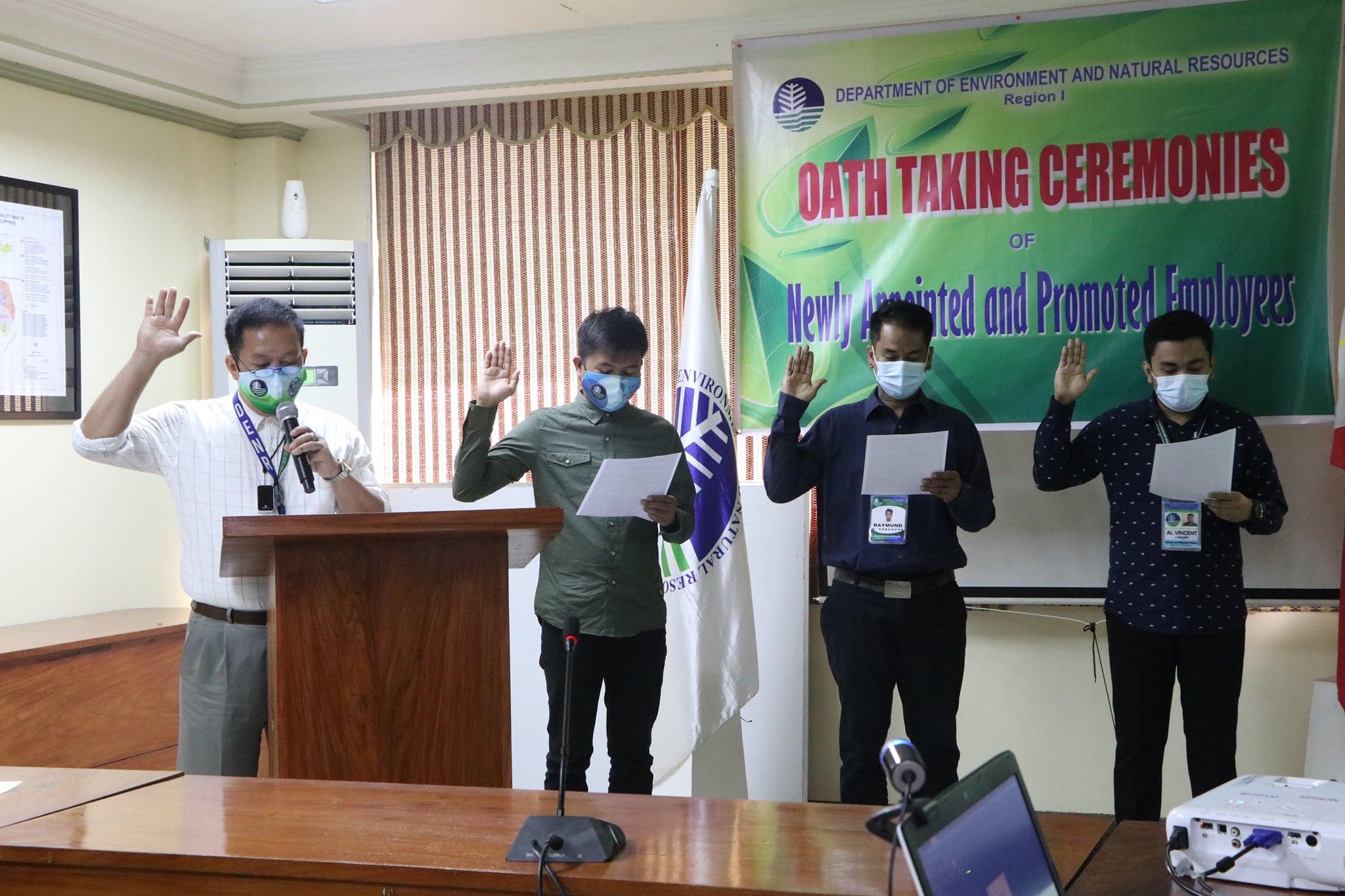 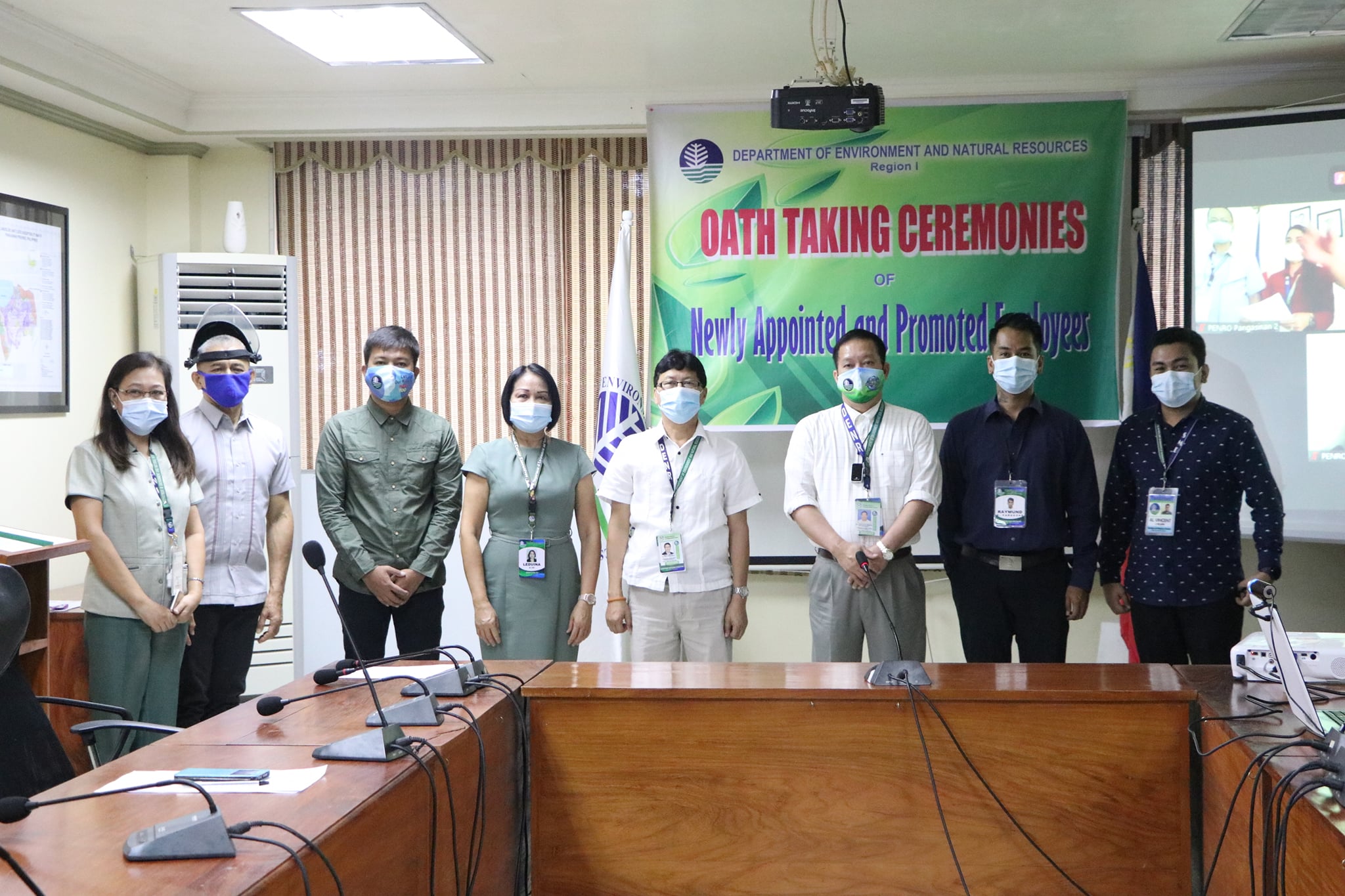 RED Atty. Crizaldy M. Barcelo who administered the oath challenged them to keep up and even step up their work and the quality of service they provide to the public. He reminded them to always put their best foot forward even in performing the simplest task assigned to them. As government employees, they should always come to work on time and always perform with integrity.

DENR-1 have filled up a total of sixteen (16) permanent positions in the last leg of recruitment, selection and placement process of CY 2020. Due to the restrictions and current situation, newly appointed and promoted employees in other field offices will conduct oath taking ceremonies in their respective PENR Offices. (RPAO-JAP) 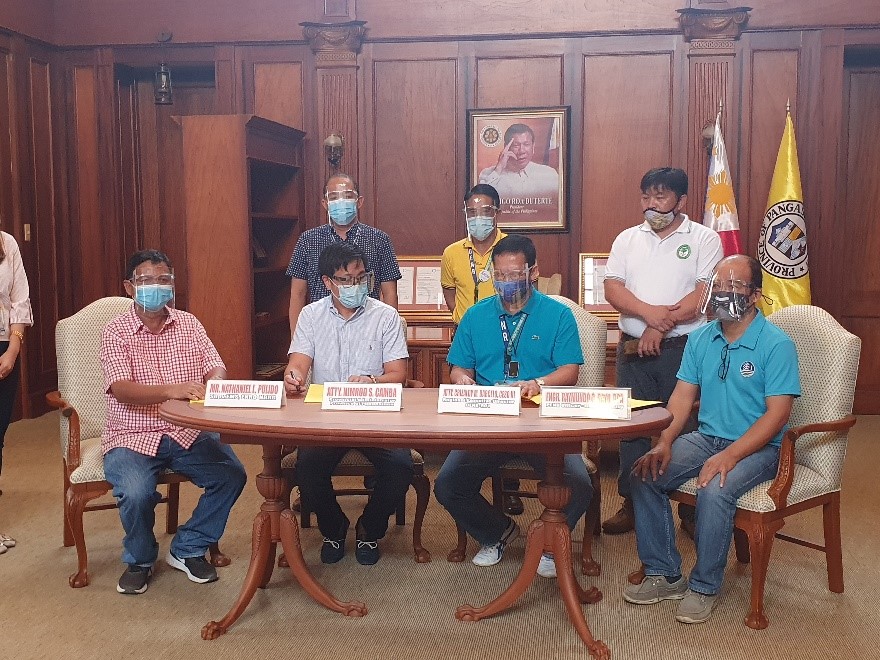 Lingayen, Pangasinan – On September 25, 2020 and amidst the pandemic, Department of Environment and Natural Resources, Region- I (DENR- I) key officials led by Regional Executive Director Atty. Crizaldy M. Barcelo attended various activities in line with the DENR mandate.

After attending the program and ceremonial tree planting activities in the Daang Kalikasan Project in Mangatarem, Pangasinan, on the same day RED Barcelo also led the National Greening Program (NGP) memorandum of agreement (MOA) signing between the DENR and the local government units of Pangasinan at the Governor’s Office Provincial Capitol, Lingayen, Pangasinan. In support to the NGP, DENR- I allocated a 110 hectare plantation site in Cayang, Bugallon and 50- hectare site in Calitlitan, Umingan, Pangasinan as NGP sites to be adopted by the Provincial Government of Pangasinan to develop in line with the Provincial Government’s project named, Adopt- a- Mountain Project which was launched in August 207 in a 20- hectare plantation site allocated by DENR.  Present during the MOA signing aside from RED Barcelo were Pangasinan Provincial Administrator Atty. Nimrod Camba, representing Governor Amado I. Espino III,   Mr. Nathaniel Pulido- OIC- ENRO- NRRG, PENRO Raymundo Gayo of Pangasinan, OIC, CENRO Urdaneta Engr.Ronnie Jacinto, OIC, CENRO of Western Pangasinan Chester Casil, CENRO Central Pangasinan Frank Vincent Danglose and officials of LGU- Mangatarem and Bugallon. 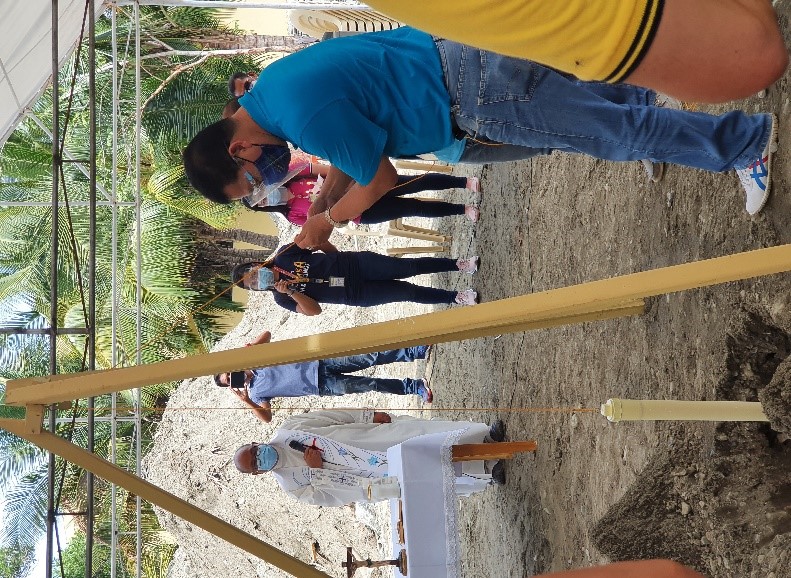 After the MOA signing at the Provincial Capitol, the ground breaking ceremonies for the construction of the new DENR- PENRO building which will be erected at the Provincial Capitol grounds which officiated by Rev. Father Hernan C. Caronongan, while RED Barcelo assisted by the provincial government official led the lowering of the time capsule to signify the start of the building construction.   (RPAO)