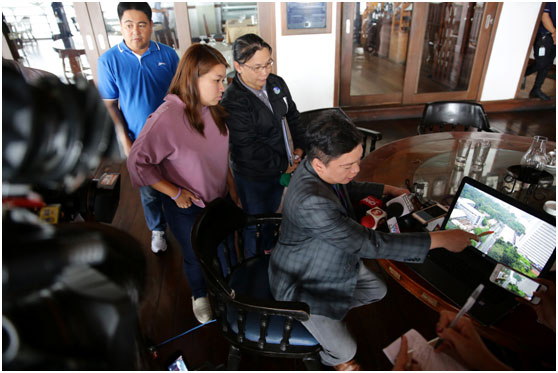 Assistant Secretary Daniel Darius Nicer (seated) of the Department of Environment and Natural Resources (DENR) shows media a drone video tracing the path of the Estero San Antonio de Abad, identified as one of the most polluted tributaries of the Manila Bay. The estero traverses residential and commercial areas within western Manila, including the area between the Central Bank and the San Juan de Dios Hospital, and ending up at the Manila Bay Yacht Club. The DENR is set to investigate establishments fronting Manila Bay to check which of them are discharging untreated wastewater or sewage directly into tributaries or the bay itself, which is a violation of the Clean Water Act. This is part of efforts to step up the cleanup of the bay 10 years after the Supreme Court first issued a mandamus to 13 government agencies to restore its water quality to safer levels. ###